A musicians verdict on Paul McCartney at Glastonbury 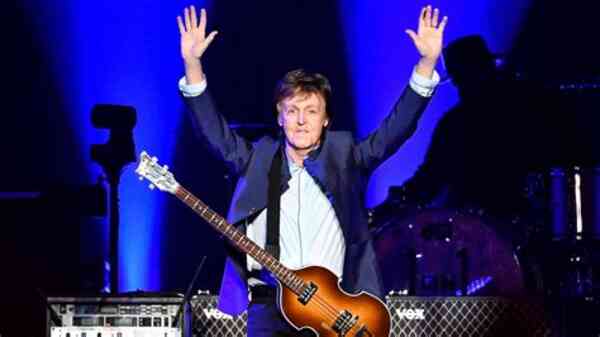 I watched Paul McCartney's set At Glastonbury Festival last night, along with my 17 year old son. If that surprises you, then I should point out that kids these days do like ‘old music’. Spotify allows them to cherry pick the best of all decades. He also listens to Queen etc. and knows the words better than me!
Paul McCartney's set was nothing short of a master class in performance, stagecraft, and songwriting.
Sir Paul’s set has settled the argument. Who was best, the Rolling Stones or The Beatles? Who da thunk it? It turns out Paul McCartney is!
Fab Macca put in his 10,000 hours of learning how to play live in Hamburg, before The Beatles were even famous. So it is not no surprise that he blew every other artist off stage at Glastonbury Festival. Including Beatle wannabee Noel Gallagher.
McCartney’s set was a formidable display of musicality. His band is so tight and disciplined after years of playing together. I’m gushing but it was that good...
To be fair, it did start a bit uneven. He played a lot of new material at first, something that the audience really didn't want. McCartney himself admitted it. He said “We know when you're enjoying a song [like a Beatles song] because all the cell phones light up and it looks like a Galaxy of stars - we know you don't like the new material, but we're going to play it anyway!”. He has certainly earned the right to do that, but it did seem a bit of a tease.
The audience was energised once he launched into the inevitable Beatle’s tracks and climaxed predictably with Hey Jude. The audience sang their heart out and McCartney gave the ultimate display of stagecraft and audience involvement asking all the guys to sing a few verses, then all the girls. The end of Hey Jude he left the stage. Spontaneously, the audience started singing it again, as if they were shellshocked by having to stop!
This triggered the inevitable encore. You might wonder how anyone could follow such a climax but McCartney had very little problem. In fact, he took it up a notch.
Peter Jackson (Lord of the Rings) told Paul he could isolate John Lennon’s voice so he could sing along with him. Paul asked, “Do you want to see that?”. Did we? Of course we did! John appeared on large screen behind the stage and we we honoured to experience the Beatle’s reunion! This is such a feat of technical excellence. Anyone of a number of things could go wrong, but it was absolutely perfect in pitch and timing. I teared up.
I haven't even mentioned. that Dave Grohl (Foo fighters/Nirvana) was a special guest. So was the Boss, Bruce Springsteen. Why wouldn't they both fly across the world to join him onstage for a rousing finale.
I also haven't mentioned that Paul was billed as the oldest artist to headline on the pyramid stage. That's entirely irrelevant. If you're good enough, you are young enough. He is undoubtedly the worlds’ number one living Musician, simply without peers.
If you read some of my other. Blogs you will see I am quite a fan of Jacob Collier. Hey is also a genius. But he will never be as important to music as Paul McCartney. No one ever will, The Beatles occupied a time and space that may never be repeated.
Sir Paul is a national treasure, beloved across the World.
My final verdict - this was the best gig I have ever seen, perhaps the best the World has ever seen, and perhaps the best gig ever. Nuff Said!