Is it worth upgrading to Cubase 12? 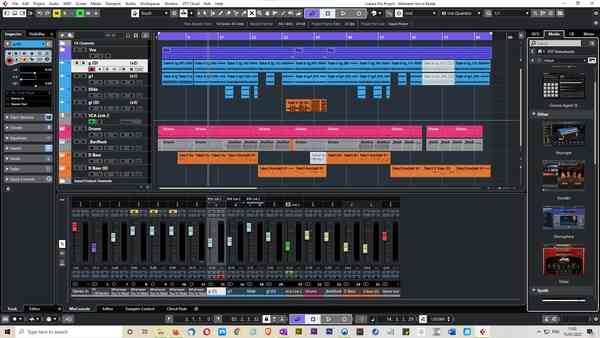 Last year I was tempted to upgrade Cubase by a Black Friday deal that allowed me to jump up three versions, from 8 to 11 for £95. This will also allow me free access to version 12, when it is released. The question is, is upgrading worth it?

Consider these reasons to upgrade Cubase

But first, the downside


You've got to expect any software to be a pain when upgrading, you expect to spend some time setting it up to your custom specification - telling it where you're VSTi's are for example.
But on this Cubase upgrade even 64 bit VST's will not work unless they are VST3 compliant. So I lost a couple of old but vital virtual instruments. Many were freebees so no monetary loss but a couple were made by lone developers who abandoned them at 32 bit. There is no 64 bit version and never will be. Bummer!
The lesson is KEEP THE OLD VERSION of Cubase running, then you can still use your old VSTi's.
Then I had this weird thing happening with my VST's - whenever you unmuted a track it played C-1. Real cost of upgrading - 2 days chasing this annoying phantom note thing.
Steinberg has always had poor tech support. Now they take weeks. I worked it out myself. Make a new track with the VST3 version. Scuffham S-gear showed s-gear_64 and you should think that might work but when you reload it show SGEAR-2 in the insert rack. Make sure you change all tracks. Cubase crashes if you have 2 different versions loaded. Check for hidden tracks too. You can imagine how much time that took me to fix by trial and error.
Other housekeeping tasks on Cubase upgrade include re-entering your custom keypad shortcuts. I took a note of them.


The problem with Cubase has always been too many commands, too much eye candy.
Trust your ears, not your eyes.
There are new features you didn't know you needed. Sort of. New library samples but not worth having.
if you're looking for magic...
Steinberg are making a big deal about being able to separate vocals from audio tracks. I could have used it when I was posting jams to SoundCloud a few years back. Pretty clever but you'll get a copyright strike if you post it to YouTube these days.
New multi-band effects - like compressors. OK but they're still just compressors.


I'm a twenty year user, three time upgrader. As an interface it's remained consistent which is great for me but I fear new users will still struggle. The usual problem area is setting up to get your first sound out. Output, inputs, busses need a PhD to work out and that hasn't improved.


It does seem to export audio faster so perhaps memory management has improved?


It was worth it for me. I judge anything by whether it inspires me to create new compositions - it did.
For the casual user, no, you won't want the learning curve to drill down into anything useful. You have everything you need back in version 8.
Have fun creating....


Just realised I was eligible for a grace period upgrade. Yippee! except the app won’t start…bummer
I don’t see Cubase 12 on the ‘My Steinberg’ eLicenser activation page online
I think I don’t need the dongle any more so does that stack up?
Clearly the new verification process has went wrong.