When I was in my teens at the beginning of the 70’s the best pop music ever made was being made then. It has been copied and sampled ever since.

Everyone (of my age or a little older) in my Cheshire village were into the Kinks so I was too. Of course everyone loved everything the Beatles - but you had to have a less mainstream act to follow. The Kinks were a great choice. Ray Davis wrote some great songs, that’s what put them ahead of other good acts around then like The Who, Traffic etc.

It was a time that Folk was fairly mainstream, trendy and my next favorite band was the Incredible String Band. These were two guys who played 50 different instruments with some unusual scales. They had a couple of birds in the background who did some vocals later but basically it was the two guys. They did a cracking album called the 5000 Spirits or the Layers of the Onion. Sadly that seems dated now.

It was the time of the blues boom and nowhere was it more popular than in England. Bands like the Stones popularized the Blues (best songs Tumbling Dice, Brown Sugar). We used to listen to them in the Kardomah coffee house in Bridge Street where a cup of coffee lasted the afternoon. 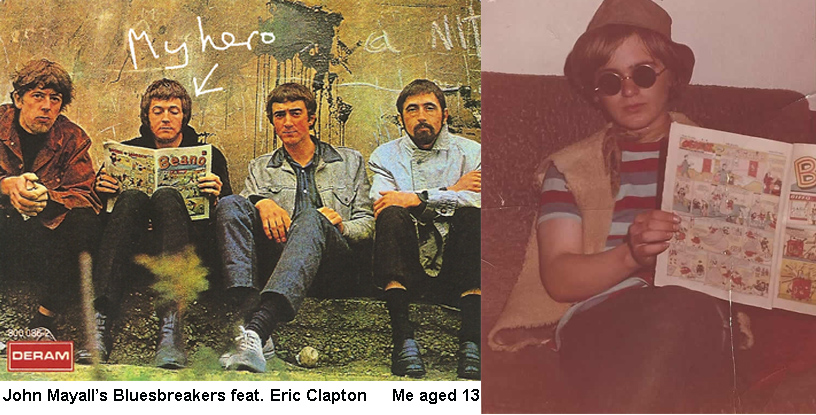 To me the purist, muso bands were most appealing. There was the classic John Mayall ‘Beano’ album featuring an unknown guitarist called Eric Clapton. I remember learning every lead solo on the LP note-for-note by slowing down my Dansette record player (to make it easier to pick up). Yes, that's vinyl - perhaps I invented scratching!

Eric went on to Cream. Disreali Gears was their best album. My band used to play a couple of their tunes. My great friend, John Hassall (RIP), our drummer, was mad keen on Ginger Baker and he could do all Ginger's licks. You can’t imagine what being in a three piece rock band is like! If your eardrums weren’t throbbing at the end of band practice – you went back and played some more until they did!